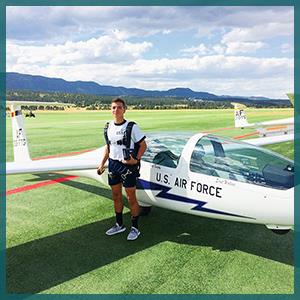 This spring, 2014 Davies graduate Mauricio Agudelo completes his second year at the United State Air Force Academy in Colorado Springs. At Davies, Agudelo was a SkillsUSA medalist and captain of the soccer team his junior and senior year. Today, Agudelo is preparing for a summer teaching fellow cadets how to fly gliders.

On break from the Academy, Agudelo visited Davies to share with us his transition from high school to college, his future plans, and the advice he’d give students today.

What was your shop at Davies?

I did Pre-Engineering. The program had a different name when I went to Davies and was a little different. I’m really glad they’re starting to take a path more towards engineering and focusing on the math aspect. That’s what I had trouble with when I first got to the Academy.

The work ethic was the biggest thing for me. High school can be, “just pass and get through.” When I got to the Academy, I was competing with all these kids and everyone wants the same thing. Everyone wants to be a pilot. So I had to make sure I was working harder than the kid next to me, staying up later than everyone, getting up earlier than everyone was, and make sure I was going and talking to the professor. In college, you actually have to sit down and give things time.

Do you still take part in sports? Do you have any time?

Of those three, what was the biggest transition for you? Did you have family who had been in the military?

I’m a first generation American, college student, and military. So, “Go big or go home!” Between academics and military – basic training was a huge culture shock for me. Usually I’m a very outgoing person and you have these people saying not to look around, and you’re at attention all the time. But because academics make up the largest portion of what we do every day, they become the most important. I try to consistently talk with Mr. Cardoso and say, “Hey, this is what we need at Davies, because this is what I struggled with here.”

What’s been your feedback? 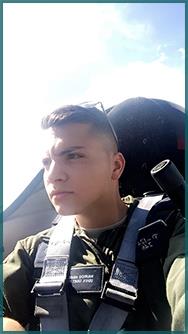 Math. STEM is huge when you go out into the real world. Especially with the kids who were in pre-engineering and want to go into engineering. It’s definitely worth their time to at least take Calculus I in high school because you’ll be competing against kids who took Calculus III in high school. It’s very, very different taking Calc III in high school compared to taking it in college. Because in college, with everyone having that advantage over you, you could end up playing catch up the entire time.

Some people could see that as a real obstacle.

You have to find your way; but you can.

What can you tell us about your plans for the summer and the next few years?

When I went to the Air Force Academy, the biggest thing was I wanted to fly fighter jets. I’ve known that since I was five years old. I went in there with that intention. But last summer I took a soaring program, to fly gliders.

Where your plane is tethered from another plane?

Exactly. Those same ones.

Is that single pilot?

It can be up to two; there’s a front seat and a back seat. The program is three weeks long and when you go in day one, you haven’t had any flying experience, it’s: “This is what an airplane does.” Then on day fourteen: “Now you know how to fly the airplane, go fly it alone.” It’s an exhilarating experience. I had the opportunity to go solo and it was an awesome time. The Rockies are just insane.

Another thing about the Academy is it’s all people run, by cadets. It’s not determined by officers or teachers. We, ourselves, run the academy, with guidance from higher ups. They were choosing the upcoming cadet instructor pilots for this summer, I applied for it, I was fortunate enough to get it and for the past nine months I’ve been working to become an instructor pilot so I can teach other people how to fly. I got my wings April 7th.

Yes, so this summer, I have the opportunity to lead the same program that I was in last year and now I’ll also get to choose next year’s instructor pilots. It’s really rewarding when you see someone go from no flight experience to, “Go soar.” It’s a huge amount of responsibility.

Between keeping in touch with Mr. Cardoso and then applying to be an instructor… Did you always know that you had this desire to “pay it forward,” so to speak, or teach?

I came to the U.S. when I was six years old and I had a lot of people growing up who went the extra mile and worked extra hard to make sure I got ahead. Today, I go to one of the most prestigious schools in the country. No debt, and I’m going to get to do what I love to do. So I feel indebted to the people who helped me out and Davies did nothing but help me out.

When I was at Davies, they and Mr. C. would keep up on me, asking, “Hey, are you getting your homework done? How’re things going?” The level of dedication everyone had in me made me realize they believed in me, which was really the only thing I needed. That was enough. To be able to do everything I’m doing and have an awesome life and be able to do stuff for my family that I couldn’t do before means a lot. 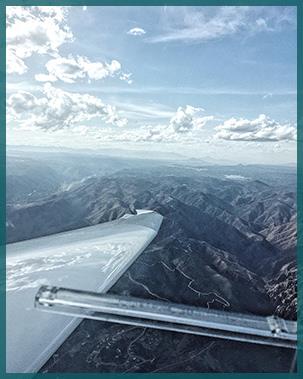 n will you begin to fly fighters?

Two years. I graduate in 2018 and then I’m straight off to pilot training. After that, I’m hoping to go to grad school.

Where would you like to go for grad school?

I’d like to go to MIT for Electrical Engineering. I was majoring in Electrical Engineering at the Academy, but I switched to Systems Engineering, which is incorporating every system together from mechanical to electrical to civil to environmental engineering. I’m doing it with a focus on human factors and how the human plays a part in engineering. So, for example, a pilot in an airplane. Making sure that every button is accessible and finding the best layout for the human interface. Or take phones. They’re meant to fit in the 95th percentile of a male’s hand. That’s how they design phone sizes. It’s the stuff like that, that you don’t really think about.

When it comes to life after high school, what advice would you give someone today?

I think just to find that one thing that inspires you. For me, it was a promise to my mom that I was going to get ahead in life. That to me was enough to wake up every morning, even on the days where you think you hate school. I was lucky because I had a set goal in life. I knew I wanted to fly. But for an incoming freshman in high school I’d say, work hard now, it pays off later. It pays huge if you work hard. Put in the work now and learn how to balance your life.