Isaac Munrayos is a 2015 graduate of Davies’ Hospitality Careers program. This October, Munrayos, now a Private First Class in the Marines, deployed to Japan for two years. Before leaving, he visited Davies to talk about how how his culinary training has helped his career path and to share advice for current high school seniors on how to stay focused.

What has your life been like since you graduated?

I graduated in 2015 and I started working. I worked at Twin’s Pizza for almost a year. I knew I wanted to do something more, but I was getting lazy. I wasn’t pushing myself. My mom was the one who pushed me to go talk to a recruiter. I went to go talk to my recruiter, she got me in food service, then I shipped off to boot camp. I began in March of 2016.

I started bootcamp in South Carolina at Parris Island and it was a challenge, but I made it through. After that, I went to North Carolina to do MCT, Marine Combat Training, which is a month where they teach you, if combat were to come, how to be prepared for it. Straight from there, I went to Virginia to Fort Lee; that’s where I have my MOS (Military Occupational Specialty) school, which is in food service.

When you first began, did you tell them you had a background in culinary?

Yes. When I was in Virginia, we had to take tests and I got straight 100s on the tests because of what I already knew from Davies. We were taking safety courses and I already had my OSHA from high school. When they saw I had four years of background, they thought, “Oh, that’s good.” They weren’t really teaching me much new, but they were honing my skills. Davies really helped me out. Over there, I excelled because I already knew the basics. They would come to class and say, “Isaac, you’re in charge.”

Being a leader isn’t so easy. I thought it would be but I found out, when they had me in leadership for awhile, that it’s hard. But I got better, and I will get better as my career continues. They want everyone to know how to be a leader and how to be a follower and really emphasize that.

Were you in any leadership positions at Davies? Or were you, at that point, not entirely sure what you wanted to do yet?

At Davies, I knew I wanted to join the military and I knew I wanted to cook. But like I said, I got lazy. Sometimes that happens to me, but Marine Corps has changed that for me. At Davies, when you’re a senior and junior, they put different people in charge of the kitchen, to see how you would run it if you were the head chef. It’s a good experience and they always cycle you at Davies. One day, you’re in salad bar. The next day, you’re head chef. Then you could be on the line. They really teach you every position so you can get a sense of the culinary life. You could work front in the dining room or you could be in the back. Senior year, you get to really decide if you like working in the kitchen or the front.

And you knew you wanted to stay on the culinary side?

Yes. I know my dining room, and I’m pretty good at it, but I like to be in the back, cooking.

Did you do ProStart (a national, culinary competition Davies takes part in)?

I didn’t reach out to the chefs. I was interested but I also worried that maybe it wasn’t for me. When I think about it, I can say I should have tried to reach out. It’s good to try to do everything you can. It’s what I do now in the Marine Corps. Whenever there’s a community service event, or any event, I’m the first one to volunteer for it. Now that I’m here, I’m trying to take advantage of any opportunities I get.

How did the opportunity for Japan come about?

In Marine Corps, you get a wish list. They ask you where you’d like to get stationed: east coast, west coast, or overseas. When they got to me, I said overseas. They give you your orders before you graduate -- not everyone got what they wanted, but when they called my name they said, “Munrayos, you got Camp Fuji.” It was exactly what I wanted. Camp Fuji is about an hour and a half away from Tokyo and I’ll be there for two years.

How do they prepare you for Japan?

When you know where you’re going, a lot of instructors have already been there and you can talk to them about it. I’ve heard it’s a really good place to be at. Camp Fuji is a small base and I’ll still be in food service, serving up to about 100 people per day.

How does your family feel?

They’re excited, but sad I won’t be here. I’m attached to my family, my mother, my grandparents.

Based on your experience as a graduate, what advice would you give to a student today?

The most important thing to get out of Davies is to stay focused on what you want to do. Don’t do stuff because your friends are doing it or because it’s popular in culture. I saw a lot of that. But stick with it, learn, and actually grasp what they teach you. This is a good school and they’ll teach you what you need to know to prepare you for the future. Pick a shop you like and don’t pick a shop because your friends are choosing it or your family wants you to. Pick a shop you know you can excel in.

Stay away from the troublemakers and don’t change who you are. People change themselves to be with other crowds. Just be yourself. I was always myself. I want to see more people be themselves and do their own thing. Be unique. That’s what we need more of in the world.

Stay in school. Stay all four years and graduate. Don’t get lazy. That’s what I did senior year and I didn’t graduate with my class on time. I didn’t cross the stage. I had to do makeup work because I was missing credits and I had to stay an extra two weeks to make up my work while everyone else graduated. I didn’t realize until it was too late that I should have put in the work. That’s why I tell everyone: Don’t be lazy your senior year. Don’t do what I did. Start your senior project and your research project early. When I had a month left of school? That’s when I said, “Oh, I should start.” You need to start early. The earlier you start, the more time you have for yourself. You’ll be done. You won’t have to worry about it. Work hard in the beginning.

It’s easy to get unfocused senior year. It goes by really fast. It goes by in a heartbeat. If you don’t work hard and stay motivated, everything will come at once and you’ll get frustrated. I’d say to break everything down into small goals: I want to achieve this by then and this by that date. Set yourself up for success. 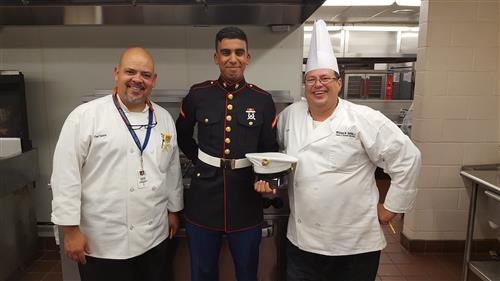