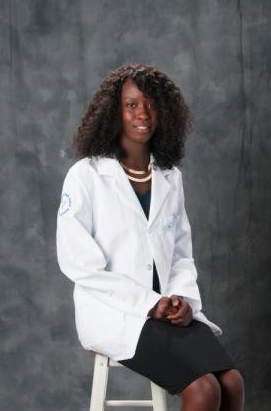 This summer, we checked in with N'deye Dabo, a 2014 graduate of the Health Careers program at Davies. This September, N'deye officially received her pharmacy short coat in the Pharm.D program at University of Rhode Island. The Pharm.D program is a six-year program where, upon completion, N'deye will receive her Doctor of Pharmacy degree. She shared with us how URI's Talent Development program helped her transition to college life, how she's adjusting to the workload, and how both her program at Davies, and her mentorship with Social Studies teacher Kristin Cassarino, helped her prepare for school.

I’ve heard from Kristin (St. Pierre) Cassarino about how intense your program is and that, over the course of it, students will often drop out.

The program has room for 130 resident students. They accept more because they assume people will drop over time. The first year, people were really holding their spot, but I think we’re under 120 now.

What challenges did you face when you began the program? Did you feel prepared?

I started in the summer because I was in the Talent Development (TD) program, which got me adjusted to college life, how busy it is, and the expectations. But there was one moment, early on, where we had to put down the APs we had that would transfer, and it seemed like I was the only one who didn’t have any AP classes coming in. It made me realize that the first year was going to be a catch-up game for me. I wouldn’t have the easier load. I wouldn’t be taking the usual 12 credits per semester, I would have to do more. I made it my goal that, by the end of summer of my first year, I would be caught up.

How did Health Careers help prepare you for the program?

I had my CNA license and I had my CVS experience. In that realm, I was ahead. I was ahead of the group in knowing what I wanted, where I was going to go with my career and future goals. I had worked at CVS before, I’d worked at different nursing homes, I’d worked at a hospital, so all those different places you’re supposed to go on rotation, I’d already worked at, and knew how they worked. Davies did amazing for me in that way. I still use my CNA license to this day. I know in the future I want to work in a hospital so I’ll be using my nursing skills in some way. So I’m making sure I’m keeping them going. When I decided to go to Davies, it was because I knew it would challenge me more than a regular school, career wise.

What sort of work do you imagine yourself doing in hospitals?

I want to do international medicine. I want to be established here first and get experience, and have a certain amount of years, then travel to countries that have a strong need of medication.

I moved here when I was ten and a half, and I was raised in Senegal for eight years. I was born here. I experienced firsthand the needs medically that Senegal experiences because of health issues my grandmother had. She had to be sent to France -- it was the closest place to meet her medical needs.

I’d like to live in Senegal again. I have a lot of family there. The family that raised me is still there. I’d love to be around family and to help. I’m here to work and go to school, for the better opportunities.

It’s a six year program. The first two years are undergraduate, you get all your chemistry and basic science classes done. If you have a 2.5 GPA or over by end of your sophomore year, you get inducted into the program. The short coat ceremony is in September, and when I’ll be officially inducted into the program. Doctors have the long coats; we have the short coats. From there, you start going on clinical rounds. You’re supposed to have somewhat of an experience in different health care settings -- nursing homes, hospitals, CVS.

Did you always know you wanted to practice medicine?

I’m a first gen college student, so my parents had no idea. They wanted to help, obviously, but it was up to me to research and get feedback. Mrs. Cassarino was a life saver. She took me and Blessing, who also graduated with me and is at URI, under her wing. She was so organized. She typed up a list for us and told us exactly what we needed to do. “This is the first step, this is the second step, sign this, tour this.” She was the one who really took it upon herself to help me and make sure I got to college. Because of her, I applied to over ten colleges, and I got into eight. I phone interviewed with UPenn, I got into UConn… In the end, I decided on URI, for financial reasons. They have the Talent Development (TD) program, which takes care of my tuition. I didn’t want to come out of college in more than $100,000 in debt.

I think having all that Clinical experience, plus being a CNA, is one of the main reasons that made me get into the program at URI. Yes, I had the GPA, but I didn’t have the classes. The Clinical experience and being able to demonstrate that I was dedicated helped.

What else were you involved in at Davies?

I competed in SkillsUSA, I went to nationals my junior year. I won my senior year, also, but couldn’t go to nationals because TD was starting. I did the SkillsUSA E. Board and was Vice President for the last year.

I actually used my SkillsUSA portfolio to get my RA job at URI. SkillsUSA helped me become so organized. I remember when Skills was first presented to our class, a lot of people thought it seemed like too much work. But, to this day, the organizational skills I learned at Skills saved my life. When I applied for the RA job, I thought, “What will set me apart?” Because more than 500 people apply each year. It’s very competitive. I knew everyone would come in with their resumes and cover letters, but I didn’t think anyone would come with a portfolio. So, during the second round of interviews, I came in with my Skills red binder, and they were so amazed. They didn’t know what SkillsUSA was so, being able to explain it, was another conversation starter. They liked that they could actually see my background, instead of just hearing about it.

So what do you do in your free time? Do you have any?

I make sure I stay involved and not all about school. I take part in the SAWA Organization -- the Student Alliance of West Africa -- and their hair show. Every year, they have one major program: the hair show. It’s supposed to be a fun, dramatic show. Someone came to one of the Davies’ fashion shows that I was in and told me to go, try out for the hair show when I got to URI. One of the first things I did at URI was the hair show -- it’s not usually what I do. I’m very reserved, very quiet, and it took me out of my comfort zone.

I also joined SEC, the student organization of entertainment. And the last thing, that’s been very major, is that me and a few other pharmacy students are starting a new frat on campus. Freshmen year we all did different frats and sororities. They were professional sororities, but I felt very out of place. My program isn’t that diverse and I’m one of few students of color. When you walk into a room, it can feel like you’re grabbing attention, at first.

Both the sorority and frat are professional, within the school of pharmacy. After my first year, I was still a member, but I became an inactive member. I was approached by some other girls who also weren’t being active, and some boys from the frat who felt the same way, and they asked me if I would be interested in being active in helping create this new, co-ed frat. We decided our frat would be open to not only Pharm.D students but Pharmside. Pharmside is a four-year program, and we have the same programs until our junior year, at which point we go our different ways.

One of the great things about starting the frat is that I get to make connections with people from different schools. One of the mentors went to UConn, for example. We also took a trip to New Jersey to meet another chapter.

It’s funny you said that you’re reserved earlier. You’re such a leader.

I love doing stuff like this. It gives me something to think about besides school. It keeps me busy -- I like being busy. What else am I going to do?

What’s your advice for Davies students?

My uncle just called me the other day. One of his friends has a younger sibling who’s coming into Davies. The biggest advice I can give is to be open-minded. It’s your time to be involved and do as much as you can. Go out of your way to make relationships, even with a teacher. That will go a long way. That can change your entire high school experience and set your future up.

I still talk to Mrs. Cassarino. I called her the other day to invite her to my short coat ceremony. They say you can’t achieve anything in life without the help of other people, and I believe she was one of those people, for me. She pushed me. She believed in me. I even called her when I got the RA job. I called and told her I was stressed and she told me, “You signed up for this, you can do it. I believe in you.” I believe she’ll always be close to me. She’s been there with me through a lot of difficult moments. I’ll always appreciate her and she never gave up on me.